Since Cryoskin and CoolSculpting both involve cold temperatures, it can sometimes be difficult to determine which one is which. Don’t fret, as this blog post aims to clear up the differences between the two. 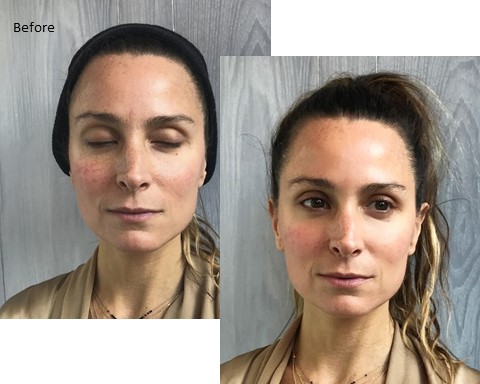 CoolSculpting is an approximately 35-minute procedure using an applicator or machine to freeze fat in certain areas. It works by applying a freezing sensation to the skin. Frozen fat cells then die off, a process known as cryolipolysis. According to CoolSculpting’s website, CoolSculpting “is a fat-reduction treatment for men and women who want to get rid of stubborn pockets of fat in certain areas of their body.” It is meant to provide an alternative to fat-reduction surgery in an FDA-approved way.  As such, it is not considered a weight loss procedure, and is best for those with an already healthy lifestyle to cut down on so-called fat “trouble spots.”

Cryoskin or Cryotherapy, on the other hand, is a process involving sitting in a cold tank with air that dips below freezing temperatures for a few minutes. There are also Cryoskin facials (or Cryofacials) that only target the face, but more typically the whole body is targeted. Rather than fat-reduction, it is designed around a myriad of uses. According to Medical News Today, a few case studies confirmed that Cryotherapy aided in pain relief and recovery for muscle pain. This allows athletes and those recovering from surgery to get back into the action faster than those who didn’t use Cryotherapy. Early research also suggests that the future of Cryotherapy could reduce mental health symptoms, migraines, and more. There is more research needed for conclusive statements in these areas, however.

If you’d like to take a relaxing trip to the spa or try some Cryoskin services, look no further than Massage Bliss & Cryo— contact us today.

If you are looking for an excellent way to rejuvenate your face, then you should look into getting a cryoskin facial. This kind of facial involves the use of a wand that massages your face. This wand is very cold, which helps cryotherapy to give you the benefits that you desire because the cold helps…

Whether striving to find that perfect carbs-to-vegetable ratio, working with a dietary restriction, or aiming to learn more about holistic, healthy eating habits, finding a nutritionist might just be the best way to heal after a challenging year. Food choices play an important role in shaping not only our bodies and what they can do…

The face needs care as it is the first thing people notice about you. If you have an appealing skin tone, it creates a great impression. Treatments like HydraFacial go a long way in ensuring that your skin looks young and smooth. HydraFacial is a medical-grade facial treatment that seeks to rejuvenate the skin. HydraFacial…

You may have heard of people talking about cold therapy or cryotherapy. Many athletes use it as a means to speed up the healing process when they get injured. While there is still some more research being conducted, cryotherapy offers plenty of benefits. So, what is it? What is Cryotherapy? Cryotherapy is a type of…

Low back pain can be extremely painful and frustrating. Whether you experience back pain for several weeks per year, or reoccurring every few months throughout the year, low back pain often interferes with both the quality and functioning of daily life. There are many medical and at-home treatments to choose from with lower back pain,…